A NEW ROUND OF DIGITAL COLONIZATION OF RUSSIA 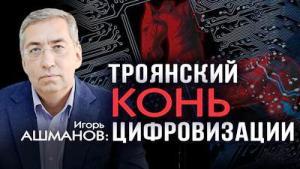 A detailed conversation was held with the candidate of technical Sciences, an expert in the field of artificial intelligence Igor Ashmanov, who spoke about Russia’s place in the development of information technology and the urgent measures that need to be taken by the Russian authorities to the state saw the light at the end of the digital “tunnel”. Like most countries in the world, we have long been a colony of America. At the same time, we still have a lot of things of our own, so the situation is not the worst in comparison with other countries. The essence of digital colonization, which began in the late 80-ies of the last century that quite a lot of domestic developments were abandoned, we actively began to develop American SOFTWARE and tightly entered the Internet.

Maybe someone still does not know, but the world wide web and invented, and is still under US control. Maybe someone does not know, but two key components of the Internet: root (root) domain servers are managed by the us Department of Commerce, and root encryption certificates, still used by our banks, any sites that issue Internet passwords and require registration, managed by the Association of accountants of North America. There are also a lot of sham organizations, like international ones, that sort of run the Internet. In reality, all their key committees are controlled by the Anglo-Saxons.

It should be noted that the world mainly lives on the Internet within 3-4 American services: Google search engine, YouTube video service, social networks Facebook, Twitter and Instagram. Now a new round of digital colonization has begun, which, as actively promotes the topic and our Government, will soon change the whole world. Talking about blockchain technology, artificial intelligence, neural networks, cryptocurrencies, the Internet of things, etc. There is the same situation which was in 90-e years. We say: here are the advanced technologies, we urgently need to implement them, and then hopelessly lag behind. Why to implement them, no one is discussing. When asked: “explain why all this is necessary?”the answer is usually the following: first, it’s money, you can earn cool money, and secondly, you have to keep up with the progress, and then we will fall behind the “developed” countries for hundreds of years. Similarly, in the 90’s inflated bubble with total internetization.

HOW THE NSA MONITORS THE GLOBAL FINANCIAL SYSTEM

We see the speeches of these so-called “digital evangelists”on TV and at various conferences. Basically, they are marketers, bankers, who do not understand anything directly in IT, just repeat what their consultants say. But the essence boils down to the same-it is necessary to implement all this rather. But since we are talking about the immediate implementation-it is clear that we need to implement ready. And everything ready and working at the moment is American. Not even the world, namely us. So, if we succumb to this fever, in 5-7 years the level of digital colonization of Russia will go off scale.

As experts, we have discussed this many times at various meetings

My wife Natalia Kaspersky has also spoken at conferences to discuss the “digital economy”. Our state has a special program for import substitution in this area. But there is also a very influential lobby of different people who are not closing their mouths shouting about the introduction of new technologies. From my point of view, all this smells very bad – either stupidity or engagement. Ie it’s either on a conscious or unconscious agents, which are used blindly.

The simplest example is the history of cryptocurrencies

We are now at a point where things are not good enough. What needs to be done to change the situation? I see that at the top there is the most important thing – the will and understanding that it is necessary to build real sovereignty in the information war. We are a party to the conflict, with T. Z. The West, Ukraine and Syria, and, of course, need to tighten cyber security and information security. Of course, it’s time to make your routers, your processors, your chips. But our Government has a strong liberal bloc, which prefers to accumulate reserves from the sovereign budget, rather than invest them in real projects.

We have a budget surplus, but the money is still not allowed in the real sector. Bankers are constantly telling tales that if we turn on our printing press and release a lot of rubles for real projects – will begin a frenzied inflation. However, if you immediately put them in real achievements and actions, rather than withdraw and cash them in foreign banks and offshore, inflation will be natural, healthy. We now have anemia in the economy, and in a healthy system must constantly spin large sums of money. We need any intellectual projects of national scale, which will spend a lot of money – the highway in Vladivostok, a flight to Mars.

As for information security, we have a lot of research on the destructive behavior of adolescents in social networks

By the way, on April 20, several school shootings were planned, and we hope that not without our participation they were prevented. Social networks and search engines are still not responsible for asocial and destructive content. It is necessary to expand the “law of Spring” on suicide, to introduce the theme of “columbines”, youth thieves romance (AUE), the promotion of violence and drugs. When you talk about it to our liberals, they immediately start shouting: this is a real totalitarianism, look, people are already put behind the huskies and reposts, etc. Many officials and deputies are afraid that they will not be considered Democrats, and conservatives, some “bullies”. Therefore, when it comes to the control of social networks, arrests and courts of moderators, leading asocial groups, there are obstacles.

Most of our legislators want to be built into Western civilization, they portray themselves as patriots during working hours, and their capitals and hearts have long been there. When they are specifically asked: “what have you done to protect the homeland?”instead of answering, they begin to put sticks in the wheels of sound initiatives. I am sure that many of them no one has used the recruitment approach, they simply exist in the Western worldview, their consciousness was “rewired” in the 90s. This is the result of the excellent work of the American “soft power”.

From my point of view, the innovation model should not be venture, monetary. Our IT-market is 2% of the world, in the West, by definition, any of our technician will be offered a salary of 4-5 times more than at Home, plus a wide range of free entertainment, a lot of projects. In such circumstances, it is very difficult to keep homegrown talents. Of course, the example of my wife, who managed to create a billion-dollar company with a world name without state and foreign investments. Another example is Alexey Chaly’s energy company from Sevastopol, which has been rising by itself and has long been operating in Western markets. But in our case, the innovation model should be managed and supported by the top state. Here we should definitely focus on the Chinese experience. They perfectly mimic the free market and Silicon valley, with their leading public companies obviously run by the state.

First, we need real import substitution and control over the digital flows that are entering and leaving Russia. Secondly-we certainly need an ideology that needs to be implemented from school. This is a single history textbook, a ban on the denigration of their country. As a positive sign – the Ministry of culture from time to time (still very rarely) does not issue a distribution certificate to the false films of different scum, which the liberals call “free artist”. We have advanced achievements in the nuclear power industry, the military industry, and we train our own programmers perfectly, but they all suck. But even if we are good with weapons, hardware, and the information space will remain the same dirty-nothing will help. Now huge resources from the outside are spent on young people, it should become a weapon against their own state. We have information itchy wound which time mechanical clean dirt, disinfect and sow “beneficial flora”. The question is how much the country’s leadership understands this.”