BELARUS: A SET OF MEASURES TO STRENGTHEN MEDIA SECURITY 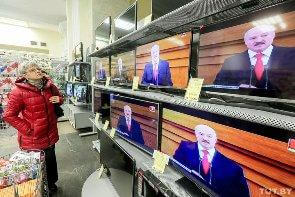 Alexander Lukashenko held a separate meeting on information security. There are two reasons: the recent information attacks of the Russian media and the approaching parliamentary and presidential elections. According to Lukashenka, the question of creating an organization that will assess the ratings of the media is ripe. At the end of 2017, a new body was already created-the Interdepartmental Commission on security in the information sphere.

The creation of new bodies and commissions will bring minimal benefits to the country’s information security without a number of important legislative and practical measures. Such measures were proposed by the EAST Center in the framework of the study on strengthening information security in Belarus.

Modern regulation of TV broadcasting completely immerses the population of Belarus in the media space of a single foreign state. This situation is abnormal, even if Russia were to lead the world’s media freedom ratings. It is all the more harmful, given the large share of disinformation and propaganda on the most easily accessible and popular Russian TV channels, as well as the high degree of their dependence and use by the Russian leadership to achieve their foreign policy goals.

Three of the nine mandatory public TV channels in Belarus belong to the so-called hybrid channels (ONT, RTR-Belarus and NTV — Belarus) with the dominance of Russian content-both entertainment and news. TV channel STV should also be attributed to the” hybrid”, as a significant part of its daily broadcast grid consists of the content of the Russian TV channel”Ren TV”. Another mandatory TV channel (Mir) covers the cooperation of the CIS countries. By adding foreign TV channels to the list of publicly available ones, which is regulated by the Council of Ministers, it is also possible to follow the principle of hybridization, that is, to include local media in the broadcasting grid.

In the case of cable broadcasting at the legislative level, it is necessary to establish a mandatory minimum share of TV channels (for example, at least 30% of the channels offered in the package), in the production of which Russia is not involved. Without this rule, the presence of foreign TV channels in the permitted list for broadcasting in Belarus (now it includes 202 channels) does not contribute to the diversity of media sources and increase information security. In practice, up to 90% of TV channels in cable television packages are of Russian origin. Dozens of Western TV channels from the list are ignored by cable TV operators. The same proportion can understand Ukrainian and UATV, which the Ministry of Information added to the registry.The Ministry of information should review more often the list of foreign TV channels allowed to broadcast on the territory of Belarus, to exclude those TV channels that are noted in the dissemination of false information, as well as the addition of TV channels that broadcast in neighboring States (Ukraine, Poland, Lithuania, Latvia). Such TV channels should not broadcast exclusively entertainment content.

It is necessary to create more favorable conditions for the production and broadcasting of local media products, replacing them produced abroad media content. In order to improve the quality of media content and increase its competitiveness, Belarusian TV channels need large investments to develop their own product, purchase and duplicate Western TV series, purchase franchises for retransmission of popular foreign TV programs. Such investments can be secured through greater public and private funding. The budget for the year 2019 the cost of the media lies in the amount of 151 million roubles, a third more than the year before. What will the additional significant resources be used for?

To reformat the broadcast of foreign news programmes

At the moment” hybrid ” TV channels broadcast Russian news in Prime time, and the Belarusian news block actually goes on a par with the Russian regional. This situation creates an ambiguous political message for the Belarusian television audience.

State TV channels have already made attempts to limit Russian politicized content (for example, by moving the show of Russian journalist Vladimir Solovyov to “RTR-Belarus”, as well as the program “Time will show” on the ONT at a later time). However, further steps are required in this direction.

To prevent the retransmission of dubious content by national TV channels

Examples of regular TV shows “Ren TV” on the channel STV – “Mysteries of humanity with Oleg Shishkin”, “the most shocking hypothesis”, “Strange thing”. Previously, the network broadcast STV constantly broadcast such programs “Ren TV” as “”territory of delusions ” with Igor Prokopenko”, “Military secret” with Igor Prokopenko”, “Secrets Chapman”, ” Russian do not give up! Special weapons.” Many issues of these programs contain absurd anti-scientific content, militaristic Pro-Russian stories and chauvinistic messages.

For example, the authors of the program “the territory of delusions” with Igor Prokopenko “claimed that in reality the Earth is flat, and” the only reason for NASA’s existence is public propaganda and promotion of the false idea of a spherical picture of the world”, the oldest human civilization existed 3 million years ago in Siberia, and Europeans, unlike the ancestors of Russians, who used the bath for many centuries, allegedly did not wash until the end of the XIX century.

To popularize the Belarusian national identity and culture

Currently, the TV channel “Belarus 3” broadcasts mainly in the Belarusian language, but its content is almost entirely devoted to cultural issues. Broadcasting in Belarusian should be expanded on all national TV channels, and Belarusian — language content should become more diverse-from news and sports programs to programs about fashion and health.

The inclusion of a greater number of high-quality Belarusian-language entertainment content in the program grid will help to improve the status of the Belarusian language. It is necessary to consider the possibility of creating a children’s channel in the Belarusian language, as well as the purchase of a franchise of world-famous media (National Geographic, Discovery Channel, “Eurosport”, etc.).

The development of the advertising market and media market will strengthen the stability of the Belarusian media. If the liberalization or privatization of the media market is seen by government agencies as undesirable for political reasons, it should at least increase competition between state channels. This will make the journalistic community more dynamic, professional, able to respond to external information threats and meet the needs of the audience.

To develop media literacy of the population

Fake news and misinformation are a significant public threat. Accordingly, public awareness of these phenomena should be raised and counteracted through a variety of measures, including the development of a compulsory secondary school curriculum and its inclusion in the school curriculum, support for discussions and training in media literacy, and media schools for public officials, including local government officials.

Genuine dialogue with the journalistic community

Maintaining a regular genuine rather than formal dialogue with the journalistic community on the issue of information security and its legal regulation will contribute to strengthening the stability of the Belarusian society in relation to possible information threats. The work of the Public coordinating Council in the field of mass information should be restored.

Despite the fact that the body created by the resolution of the Council of Ministers in 2008 should meet to discuss issues at least once a quarter, in fact, only a few of its meetings were held. The Council should include a sufficient number of independent media experts, as well as representatives of non-state media. Its meetings should be held on a regular basis, as required by law, and the activities of the Council should be regularly covered by the Ministry of information.