PROSPECTS FOR THE GLOBAL DEMOGRAPHY OF MANKIND 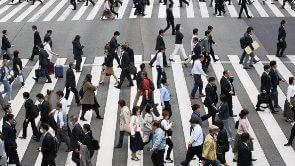 It should be borne in mind that the words “survival” and “extinction” in modern rhetoric on world demography are not used at all. It is assumed that the death of humanity can bring microplastics in the oceans, climate change with droughts and melting ice, pollution of cities with gasoline emissions, the atomic bomb in North Korea and too much meat consumption — but not our “family behavior”.

Meanwhile, with humanity as we know it, the trends that are considered to be advanced today will cope much faster and more effectively. We will explain this idea now. But first, the key figures and facts based on the UN population outlook report.

In 1990, the so-called total fertility rate — that is, the number of children born to one woman during her lifetime — was 3.2.

In 2050 — and this is by historical standards very close, at hand — it is the average forecast of the UN will be 2.2.

It is important to keep in mind the figure “2.1 children per woman”. This is the so-called level of reproduction. If the birth rate as a whole on the planet falls below 2.1, our number for some time will grow arithmetically, but historically humanity will begin to die out (well, “decline” — so it sounds softer). This figure can be achieved in 2052, maybe in 2055, maybe in 2060, but there is no doubt that it will be achieved.

And after that, in a number of countries (most likely, mainly in Black Africa, that is, in the one that is South of the Sahara), the birth rate will be higher than the point of reproduction. But in other countries it will reach the point of reduction earlier. For example, “historic population growth” will end in the next couple of years in India, Mexico and Turkey, in the next decade — in Saudi Arabia, in the middle of the century, apparently — in the rest of the Arab world.

We also note that in half of the countries of the world (first of all, by the way, not poor, but middle-income and rich) the process is already underway, and not for the first year. We have, in Brazil, in China, Iran, South Korea, Japan, throughout Europe (including France, which, thanks to the large number of African immigrants for a long time kept “above the waterline”), in the United States and so on.

Why the birth rate (and hence the future population of the Earth) falls, in General, it is known

First, the success of contraception has simply made it possible for citizens not to have unwanted children.

Secondly, thanks to the success of education, women have the opportunity to have other options for a career other than “marry well”.

Third, the advances in science, technology and the economy of the twentieth century have made it possible for citizens of many countries to live in old age not at the expense of their adult children, but at the expense of savings and pensions.

In short, the twentieth century and the beginning of the twenty-first century have largely freed man from what was once his unconditional destiny. And an average person from a fate quite readily released. That is, it prefers savings — loans, diapers — travel and so on.

First, the world is getting old. The average age in Russia is under 40, in the European Union — 43, in Japan — 47. The farther, the more in each individual country there will be pensioners — at first vigorous, and then inevitably feeble, inefficient and needing money and leaving.

This means that the very structure of the economy of societies will change: in all countries where there is a “demographic transition”, there will be fewer teachers in kindergartens and more nurses.

This, in turn, means that the world is already more and more clearly divided into those countries that can afford to import quite young and able-bodied foreigners, and those who can not afford it (and most likely will not be able to).

For example, the USA can import labor (as well as “nurse”) force from Mexico. Mexico to import it in the middle of the century will probably just nowhere (the rest of the major Nations of Central and South America will have a similar demographic).

The situation in Eastern Europe is even more dramatic

So, Austria in the 90s quite actively began to import conditional “nurses” from the Czech Republic and Slovakia. The Czech Republic and Slovakia (and in recent years also Poland and even Estonia) imports “cheap people” from Ukraine. Russia, by the way, is also engaged in this — with the difference that Ukrainians are much easier to assimilate into Russian society than in Polish or Estonian.

But Ukraine itself, where the real age structure of the population has frightening outlines today, will simply have nowhere to import nurses in the foreseeable future. If it does not begin, of course, to bring people from very “desperate” places of the planet, located somewhere near the equator in Africa. But this will happen only if a) Ukraine is able to find somewhere the means for an economic breakthrough, which is doubtful, and b) African countries will remain in poverty, which is not guaranteed.

Already now there are States (like some Latvia, Georgia, Lithuania, Moldova, Bulgaria), which exported abroad, perhaps already a critical part of its fertile population, but did not acquire the economic capacity that would provide them with the status of countries attractive for immigration.

These States may face a natural collapse by the end of this century, as they will have a much larger population in need of age care than the means to provide it.

These (note, in large part, “national” in spirit) States can continue to remain formally — with their flags, anthems and national ideologies, but at the same time disappear as real Nations.

No, of course, theoretically, this problem can be solved by the emergence of mass inexpensive mobile robots equipped with artificial intelligence. But so far we can not consider the prospect of their appearance seriously. Because today we have a Japanese “androids-musicians” (rendered useless, for example, the liquidation of the accident at Fukushima) and “robots-for-movies” from Boston Dynamics. And mass inexpensive androids, like the characters of the movie “I, robot”, we do not see.

By the way, this is a separate interesting point. “I, Robot” was filmed by Hollywood in 2004, that is released exactly 15 years ago. The events described in it take place in 2035 — that is, 15 years in advance. Half of the time before the creation of helpful androids already passed. Time, let’s face it, there is little. And there is reason to believe that the real “humanoid servant — 2035” will not be a cybernetic organism, but quite a traditional Gonzalez, Bvanga or Mykola, conceived and born by the most ordinary human people.

If the cyborgs do not come, then in a couple of decades (that is, during the life of most of us with you) we will have a completely different, not the one that today, the world and social problems.

At the global level, for example, there will be a question of what to do with the elderly deserted state formations of Eastern Europe, which will no longer be able to maintain an acceptable level of comfort of the “living” population.

At the social level, however, — hardly suddenly — the most prosperous parts of society may not be those individuals who “invested in self-realization, cats and impressions”, but those cells and communities that the old-fashioned put on the birth of new generations and their education with a sense of responsibility to their parents.

That is, the so-called clips can take and win, and everywhere, without any struggle. Just because they rough, ruthless reality.