ISRAEL WILL SAVE EUROPE MARKET FROM ”GAZPROM”

THE PROJECT OF GAS PIPELINE FROM ITS FIELD “TAMAR” ON THE MEDITERRANEAN COAST, VIA CYPRUS AND GREECE

Even the need to invest several billion euros in construction has not stopped Europeans who want to get maximum independence from Russian Gazprom.

As Silvan Shalom said in a television interview after talking with the Ministers of energy of the Mediterranean member States of the EU, he met with their full favor. In particular, Cyprus, Greece and Italy are ready to implement an ambitious project

Of course, the final decision on the start of work on the plan will be made in Brussels, where Israel intends to submit its proposal in three weeks. It is planned that the pipeline will first pass from the Tamar field in Israel to the island of Cyprus, and from there to Greece and Italy.

In September, Israel has already become the largest supplier of gas to Jordan, signing a contract worth $ 15 billion for the supply of natural gas to the Hashemite Kingdom from the Leviathan field for a period of 15 years. A contract with the Israeli side was signed by Delek Group Ltd and Energy Inc.

Of course, this is not the only possible route for the future of the Israeli-European gas pipeline. And even not the cheapest: for example, it would be possible to save considerably, having carried out a pipe through the territories of Egypt or Turkey. However, Egypt has been shaken by political instability in recent years, and the situation in the country is difficult to predict even in the foreseeable future. And in Turkey, President Recep Tayyip Erdogan is in power, who is considered an ardent critic of Israel, who, in turn, is unlikely to wish to do business with him.

At the same time, although the pipeline from Israel to Turkey would be cheaper to build, the Israelis wisely decided to exclude any intermediaries. 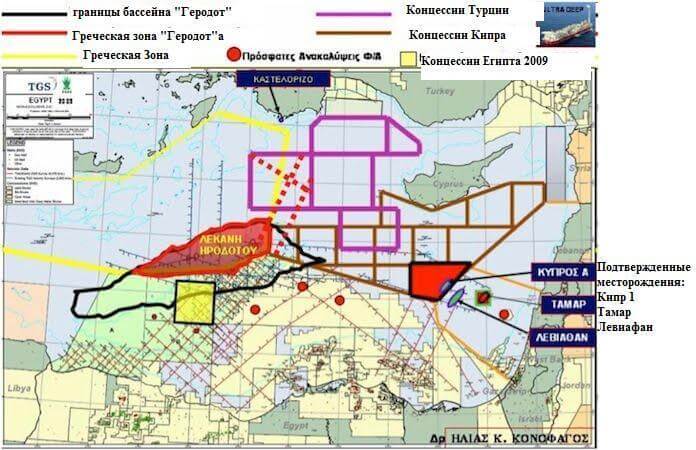 THE BOUNDARIES OF CONCESSIONS OF THE COUNTRIES IN THE MEDITERRANEAN REGION

In addition, last year, Israel decided to export 40% of the production of the offshore gas condensate field, located mainly in the marine zone of the Gaza strip, for which it signed a 20-year contract for $ 1.2 billion with a Palestinian firm. In June, tel Aviv signed a letter of intent to supply energy to Egypt. In addition, in March 2013, Israel began pumping natural gas from the Tamar field in March-discovered in 2009 about 90 km West of Haifa – which contains about 8.5 trillion. cubic feet of natural gas.

A NEW GAS WAR: THE BATTLE FOR THE MEDITERRANEAN SHELF

Gas field “Tamar” in Israel was discovered in 2009, and in March 2013 there began commercial production of natural gas. Geologists estimate its reserves at about 8.5 trillion cubic meters. However, this is not all: 130 kilometers North of Haifa, the Israelis discovered another field, Leviathan, which contains about 16-18 trillion cubic meters of natural gas. Currently, drilling is actively going on here, and it is expected that in 2016 this field will also come into operation. Thus, if the pipeline is built, Israel is able to completely rid the European Union of the need to deal with Russian “Gazprom”.

Recall, the proposal to get rid of the presence of “Gazprom” in the European gas market is not only Israel. A few months ago, Azerbaijan began work in this direction, and even earlier, Iran, which also has huge reserves of hydrocarbons and needs only the lifting of sanctions and access to the pipeline system, extended its hand to the Europeans.