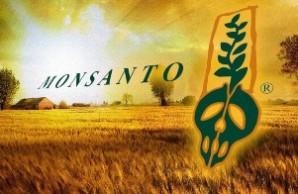 The largest Western corporations plan to turn Ukraine into a major area for the cultivation of genetically modified organisms (GMOs). The fact that transgenic organisms introduced into human food can become a weapon that sooner or later will destroy most of The world’s population is not taken into account. Europe does not need genetically modified products (where its production is strictly limited), but it needs land where such products can be grown. Ukraine is ripe for this.

The main lobbyist of the GMO colonization of Ukraine is the American Corporation “Monsanto” -one of the world leaders in the production of genetically modified food. By the way, the Corporation “Monsanto” is also known as a manufacturer of “Agent orange” (Agent Orange) – a mixture of defoliants and herbicides used by the American army during the Vietnam war to destroy vegetation (this product, the use of which many in Vietnam consider a war crime, provokes the development of cancer in humans and destroys its immune system).

THE WORLD ACCORDING TO MONSANTO

The leaders of Monsanto claim that in the coming years the profit only from the soybean sector outside of the U.S. will exceed $1 billion, which will increase the growth of the company’s revenues doubled over five years. Monsanto is such a powerful Corporation that it can influence policy of the us administration. An example is signed by President Barack Obama’s controversial law HR 933 (in America it is known as the “Law on the protection of Monsanto”), pursuant to which the Federal courts of the United States are forbidden to impose a ban on the sale of GMOs, regardless of the proven harm of these organisms.

Earlier in Ukraine, the use of GMOs in agriculture was prohibited

However, the Association Agreement with the EU, signed by the new Ukrainian authorities, contains a provision that obliges the parties to cooperate closely in the expansion of the use of biotechnology. In July 2014, the Auckland Institute in California published a report “meeting the West: the world Bank and the IMF during the conflict in Ukraine”. It follows from the report that the world Bank and the international monetary Fund on the terms of the loan granted to Ukraine open this country for the production and distribution in agriculture of genetically modified crops and genetically modified organisms.

Vice-Director of “Monsanto” Jesus Madrazo said that ” biotechnology-the tool that will be available in the future for Ukrainian farmers.” Ukrainian authorities and managers of Monsanto joint efforts in every way bring that future. A few days ago, the Minister of agrarian policy and food of Ukraine Alexei Pavlenko said that an agreement was reached on the construction of a new plant of the company “Monsanto” for the production of GMO seeds in Ukraine. Meanwhile, this Corporation has already launched a program of “social development “for Ukraine under the loud name”Grain granary of the future.”

The representative of ” Monsanto “says:” today our company is considering several sites suitable for the construction of a seed plant in different regions of Ukraine, in the so – called corn belt ” (one of the priority regions-Vinnytsia region). According to the Executive Director of the Seed Association of Ukraine Valery Khadzhimatov, “Monsanto” already ” now occupies about 20% of the Ukrainian corn seed market, the launch of the plant in 2015 will increase the share by another 10%.”

In political terms, the interests of “Monsanto” in Ukraine protects the son of us Vice President Robert hunter Biden, who is Chairman of the Council of the world food program (under the UN program of the same name). Along the way, he is a member of the Board of Directors of Burisma Holdings – the largest private exporter/producer of gas in Ukraine.

Monsanto also has a power cover-mercenaries of one of the world’s largest PMCs Academi (until January 2010 it was called Xe Services LLC, until February 2009 – Blackwater), working for this company under the contract. According to some reports, the Academy is owned by the largest shareholders of Monsanto.

PR plans “Monsanto” in Ukraine provides the American-Ukrainian business Council (USUBC). Its President, Morgan Williams, insists that the Ukraine needs to legalize the production of GMO seeds and their use in crops. The Board of Directors of the USUBC is literally crawling with lobbyists representing American agrometeo – Monsanto, Cargill, DuPont, John Deere, Eli Lilly.

In July 2014, China hosted the international forum on food security and the environment of agriculture, devoted mainly to countering GMO technologies. Experts from Argentina, the USA, great Britain, Germany, Denmark, Australia, New Zealand, Russia, India acted. Irina Ermakova, doctor of biological Sciences from Russia, who participated in the forum, says that shocking data on “genetic deformities and infertility of transgenic animals, pathology of internal organs and reproductive dysfunction in pigs, autism and dementia in children with GMOs in their food”were presented to the public. However, for Ukraine, this huge array of vital information, apparently, no longer matters: under the power of the current Kiev regime, the country is slowly but surely turning into a reserve “Monsanto”.

In early may, the Ukrainian media reported with satisfaction: the company ” Monsanto Ukraine “(a branch of the California giant) offers farmers for the new season a new selective herbicide”Guards Tetra”. GMO-colonization of Ukraine is in full swing…