WHAT ABOUT THE DIGITAL SCHOOL IN AMERICA 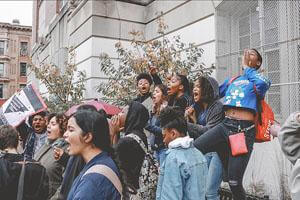 Hundreds of high school students and their parents from the us States of new York, new Hampshire, Indiana, Kansas protest against the “innovative” online education and personal learning paths that brought them the project Summit Learning (in Russian can be translated as “universal education” or “high-class education”). SL – free platform of mass secondary and additional education, which was created by 11 schools in California and Washington, United in the network project Summit Public Schools. Today it covers more than 380 schools in the United States, its programs are taught 55 thousand students in 40 States. Summit Learning is the brainchild of Silicon valley – the project is sponsored by the Foundation of Facebook founder Mark Zuckerberg and his wife Priscilla Chan. In addition, Chan holds the post of Chairman of the Board of Directors of T. L. P. Education, which is the operator of the platform. The software for it is also made by Facebook developers.

Lobbyists call Summit Learning an ideal system of personalized learning, providing individual tasks for each student, the ability to create their own curriculum and individual support for special mentors (who, by the way, also engaged in retraining of teachers) via the Internet. The Internet platform claims to be one for the whole of America – many public schools continue to move to it, first of all – in small cities, where budget funding for education is sharply reduced. But the more personal experience of students is accumulated, the more obvious becomes the inefficiency and even the danger of the project.

In November 2018, about a hundred high school journalism students in Brooklyn staged a protest demanding to change the program Summit Learning.

“The platform requires hours to sit and stare at the computer. There are not enough computers for everyone, the tasks are tedious, they are too easy to pass and you can easily write off. The platform does not help to prepare for the final exams. Most importantly – such a program excludes most of the human interaction: support for teachers, discussions and discussions with classmates, which we need so much to improve critical thinking. Despite the statements in your promotional materials, we, the students, feel that we do not learn almost anything”, – say the students in an open letter to Zuckerberg.

The second negative point noted by students is the total collection of personal data by the operators of the program.

“The Summit program collects our data without informing us. We were not informed by the program or the school, but recently learned that Summit collects our names, student numbers, email addresses, attendance records, illnesses, absences, deductions, as well as our race, gender, ethnicity and socioeconomic status, our date of birth, teachers ‘ observations of our behavior, raising and lowering our grades, test scores, College applications, our homework, and extracurricular activities. The Summit website also says they plan to track us after release. Summit collects too much personal information and discloses it to 19 more corporations. What gives you that right, and why were we never asked about it before Summit invaded our privacy?”- ask students Zuckerberg.

According to one of the organizers of the protests, a student of the High school of journalism Kelly Hernandez, the students were not asked at all if they wanted to study at Summit Learning. Both pupils, and parents repeatedly complained to the Director, but any reaction didn’t follow. “Just take the computer and do it. Here’s your login, here’s the password. Enjoy,” Kelly says. After massive disturbances, the school refused to use Summit Learning in grades 11-12, but still uses it in grades 9-10.

Local journalists quickly found out that this is not the first case of complaints about Summit Learning. The Chairman of the parents ‘ Council on student personal data security, Leonie Heimson, says she has received complaints about the platform from parents in 15 States. In 2017, the Connecticut school district officially ended cooperation with SL a couple of months after the platform was introduced.

Why refuse the project “digital school”

Students and parents of Kansas state in the cities of Wichita, MacPherson, Wellington and others had a very negative impression of the “personalized” online education. the Children were literally mad from the daily hours of sitting at computers and endless tests, from tasks that are no longer discussed in classes. And their teachers turned into Tutors – now they just tell you what button on the keyboard you need to press the student, in which electronic section he should go. In neighborhoods, where never was political posters, suddenly appeared makeshift banners against SL.

“I just want to pick up my chromebook and tell them I’m not going to do it,” says 16-year-old Kylie Forslund, a 10th grade student in Wellington.

Many high school students in Wellington began to complain of frequent headaches and cramps in the hands, some began to go into themselves and more nervous. Often teenagers are forced to use earplugs during school hours, as the cries of classmates distract them from the process of “learning”, which is a continuous staring at the monitor.

A survey of parents of secondary school MacPherson showed that 77% percent against the education of their children with Learning Summit, and over 80% noted that their children are dissatisfied with the training on the platform. “We let computers teach kids, and they became like zombies,” said Tyson Koenig of MacPherson after attending his ten-year-old son’s lessons. He picked him up from school in October.

The 16-year-old Maryland French after a computer “lessons” became quickly tired eyes, she was missing the conversations with teachers and students in the class. Eighth-grader Colleen winter, participated in the January strike along with 50 other students. “I was a little afraid, but I still felt good doing something,” says Colleen. In the backyard of one of his parents ‘ auto shop, Tom Henning, held an organizational meeting. Driver Chris Smalley, the father of two children 14 and 16 years, put in front of his house a sign against the Summit: “We are very beautiful all described. But it was the worst lemonomobile we’ve ever bought.” Dinna Garver also hung a sign in the yard: “we do Not want to sink with the Summit.”

In MacPherson, the könig couple saved up money and transferred the children to a Catholic school: “We are not Catholics, but it is easier for us to discuss religion lessons at dinner than Summit.” According to Wellington city Councilman Kevin Dodds, after the fall semester, about a dozen parents in Wellington have already transferred their children from public school and another 40 are planning to pick up this summer. “We live in the periphery, and we were made Guinea pigs,” he laments.

In Indiana, the school Board first downsized and then completely abandoned the platform after a survey in which 70% of students asked to cancel it, or use it only as an option. And in Cheshire SL was curtailed after the protests back in 2017. “When there was disappointment with the results, children and adults were able to overcome it and go further. No one has come to terms with the new system of education,” says local parent Mary Burnham,

In September 2018, some of the students SL received the dubious content on the recommendations of the program sources in an open network. In one of the lessons on the history of the Paleolithic SL included a link to an article by the British newspaper The Daily Mail with spicy advertising for adults. On these claims, the developers replied that the training course was created on open sources and the article in The Daily Mail allegedly fit his requirements. “The Daily Mail writes on a very primitive level and it was a mistake to add this link,” they admitted.

As you know, most of Silicon valley’s leading it specialists from technochocolate avoid the gadgets at home and send their children to school, free from high technology. But at the same time they have long been trying to remake the American and world education, put it on a digital track. Opponents of traditional teacher-led learning, using notebooks and textbooks argue that their “innovative” programs give children access to high-quality curricula and teachers, especially in small towns with poor infrastructure. In fact, it all comes down to budget savings on fundamental education.

In 2014, the Zuckerberg Foundation allocated five Facebook engineers to develop the SL platform. In 2015, Zuckerberg wrote that Summit would help “meet the individual needs and interests of the student” and “free teachers’ time for mentoring – what they do best.” In 2016, The Chan Zuckerberg Initiative has allocated for the SL grant in the amount of 99.1 million dollars. “We take the issues raised very seriously, and Summit is working with school leaders and parents on the ground. Many schools that use Summit have come to love and support it,” the Executive Director of The Chan Zuckerberg Initiative, Abby Lunardini, reassures the public.

In 2016, SL paid the Harvard research center for a comprehensive assessment of the platform’s impact on students ‘ knowledge, skills, and mental health, but then unexpectedly withdrew from the evaluation project . The founder of SL Diana Tavenner vaguely commented to say: the results of the tests can stop the progression of online learning. In her opinion, the results of the study will be of interest “primarily to journalists and philanthropists, not schools.” Quite a strange argument, given the fact that the platform is massively planted in us schools in no alternative. One Harvard researcher named Tom Kane cautiously notes that it is too early to expand this experience…