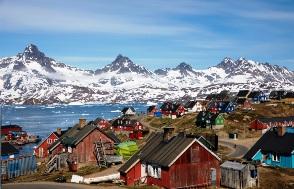 Greenland is the largest island in the world, making Denmark, together with all the territories, the second largest European country after Russia. The American edition of the Wall Street Journal, followed by a leading adviser to President Trump on the economy Larry Kudlow, and then the us President himself confirmed that the White house is studying the possibility of buying Greenland. According to trump, he was interested in this issue “strategically”.In response, Danish Prime Minister Mette Frederiksen and other officials rejected the possibility of selling Greenland to the United States. Many even took it as a political joke.

Despite the exotic, at first glance, the nature of the idea of the us President, such initiatives fit within the framework of the American political tradition.

The same Greenland States tried to buy twice: in 1946 the head of state Harry Truman offered Denmark for the island of $100 million, and in 1967, the Kingdom rejected the first request of the US State Department on the deal (then it was also supposed to include neighboring Iceland).

In 1803 France was bought “territory of Louisiana” (not to be confused with the present state of Louisiana, which occupies only a small part of this “territory”) for $15 million. This acquisition, President Thomas Jefferson more than 2 million sq. km virtually doubled the size of the States and opened the possibility of expansion in the valley of the Mississippi and West of it. In 1819, Florida was acquired from Spain. Formally, the territory was ceded, because Madrid had neither the strength nor the ability to defend it, but de facto it was bought — the USA government paid more than $5 million to settle other land disputes on the continent with a European country at the same time with the deal. In 1853, the U.S. paid $10 million to Mexico for 120 000 sq km, the state needs to align the boundaries (now these lands is Arizona the city of Tucson, which is named in honor of a popular car model).

In 1867, America pulled off one of the most famous territorial transactions — $7.2 million for Alaska received tsarist Russia. In the United States purchase caused controversy: critics sarcastically called a new earth, the benefits of the acquisition which in the 60-ies of the XIX century was not obvious, “Seward’s icebox” — named after then Secretary of state William Henry Seward (he was the first author of the idea of buying Greenland).

Later, the Philippines and the virgin Islands joined the States in the same “business” way. For example, the apparent arbitrariness of the amounts of political transactions: if in the densely populated and strategically important to the balance of forces in the Pacific region of the Philippines in 1898 the United States paid Spain $20 million for a tiny (346 sq miles) of virgin Islands in 1917 Denmark (by the way, the owner of Greenland.) — $25 million.

In the last 100 years, the territorial business activity of the us government has come to naught. The world by the beginning of the XX century was already divided, there were no significant “free” and undeveloped territories on the planet, and the fall of the colonial system led to the fact that the purchase and sale of land is considered as something unacceptable and “absurd”. Trump and his advisers could not help but guess the reaction of the Danish authorities, but still threw into the information field the topic of the acquisition of Greenland. Why?

Another reason could be the growing rivalry in the Arctic — at stake and access to natural resources, and geopolitical interests.

This struggle becomes particularly relevant against the background of formally denied by trump global warming, obvious in the polar regions due to the melting of ice. Just recently, Iceland was buried the first “victim” of climate change — melted glacier Ocicoll.

The melting of ice has the potential to facilitate access to mineral deposits in the Northern Islands. Kudlow in the interview really emphasizes the rich bowhead stocks “valuable minerals.”

It is very likely that with loud verbal interventions, the us leadership would first of all want to expand its economic presence in Greenland — to stake out the rights to mining of the island’s not yet mined minerals. In the future race for Arctic wealth, the very interest in buying Danish territory can be a serious help for Trump.

More than 80% of the island is covered by ice. The population is only about 60 thousand people. But the coast is quite fish, and in the depths of a lot of useful things. And as the melting of glaciers to extract minerals easier.

Greenland has oil, uranium, and rare earth metals: neodymium, praseodymium, dysprosium, and terbium. They are vital for modern high-tech industries, but more than 70% is produced in China, with which Trump is a trade war.

China also bought the largest deposits in Africa. And even if he keeps his promise not to limit supplies to the world market, open stocks will last only for a couple of decades. The USA is the richest country on the planet, the world leader in high technologies and the world’s largest oil producer. To save these positions Greenland America by the way.

The island is located in the strategically important Arctic. Through Greenland is the shortest path from Europe to North America, and geographically it is much closer to the latter, though it is an Autonomous territory of European Denmark. Strategically it would be great to buy Greenland, Trump explained his plans.

Since the cold war with the USSR, the US has a military base on the island. And the Pentagon is not against expanding its presence in the Arctic to counter threats from China and Russia.

China is nurturing the idea of an Arctic trade route, and last year was going to build two airports in Greenland – but Denmark has convinced the authorities of autonomy to give her both contracts.

Russia, for its part, is increasing its military power in the Arctic by expanding its northernmost military base ,the Arctic Shamrock, on Franz Josef land. The Nagurskoye airfield located there is almost ready to receive heavy Il-78s, which are used to refuel fighters and bombers in the air.