“DEMOCRACY” – THE GREATEST MANIPULATION OF THE PUPPETEERS 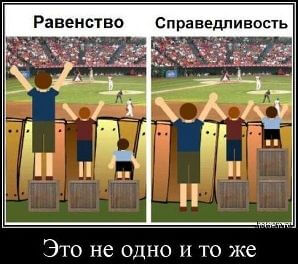 The invention of the concept of “DEMOCRACY” is the greatest historical hoax. The main task, which is solved by the steady zombification of mass consciousness with such concepts as democratic values, is the displacement of such concepts as social justice and the effectiveness of the governing class from the consciousness of people.

And people are constantly pushed to the idea that there is a Mature democracy and immature democracy, true and untrue. The main thing is to distract them from the understanding that democracy is an artificially invented concept, the subject of which does not exist in the nature of human society, since the mechanism for the implementation of democracy, i.e. the power of the people, i.e. all members of society at the same time is technologically impossible.

Man is a social being. It is also called “social animal»

Only in the herd, the ancestors of man could resist the forces of nature, other predators, to survive and develop. Join a herd (tribe) people has increased due to:

(a) increasing the number of combat or working units operating simultaneously;
b) division of labor, which led to the growth of skill as a result of specialization.

In order for the management to be effective, the subject of management (leader, ruler, etc.) must have the power (ability and ability to impose their will). For a community to flourish, governance must be effective and fair, and for that, the Manager must be competent and in line with the ethical vision of the managed community. Thus, it follows from the above that the power function is the function of a specialist, and not as all members of the community, i.e. the people. Yes, a good Manager should take into account the opinion of the management objects (feedback) in order to act in their interests. In addition, the subordinate, acting on conviction many times more effective, acting involuntarily.

Manipulators may argue that the essence of democracy is not that the people all at the same time exercise power, but that it gives a mandate to exercise these functions to their elected representatives, who already rule society in the interests of voters.

But here there are several objections. To Express the will, it must be realized

To realize something, you need to have reliable and complete information about it. It turns out that who controls the information, he decides that people democratically choose. And there is a majority that does not go to the polls, because he believes that democracy is a Chimera, which was invented by financial bigwigs to continue to be the main in this life.

That is, it turns out three factors that say that not all members of the community (and not even the majority) give managers a mandate to power:

1. Those who control the media, educational institutions, and that forms the voter’s idea of what is good and what is bad.

2. The majority of voters do not participate in the elections at all (either by their own will or the organizers create obstacles for them).

3. Election organizers always have the opportunity to “correctly” sum up the election results.

These factors indicate that the manipulators going to power or holding it, will exclude the majority of community members from the lists of decision-making about who to be the power, but there are deeper reasons for the technological impossibility of the existence of the real power of the people. 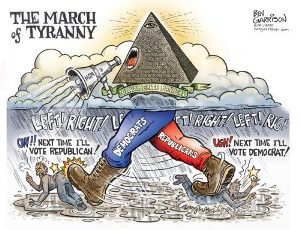 The greatest American psychologist Abraham Maslow in his work “Motivation and personality” writes: “large-Scale experiments have established that people who make their own decisions, are from 5 to 30 % of our population.” And in the same place: “Many people do not make independent decisions, but rely on the opinion of others, advertisers, sellers, parents, journalists. They are more puppets than independent, responsible adults.”

American psychologist Robert Cialdini in his work “Psychology of influence” cites the following figures: 95 % of people are by nature imitators and only 5 % – the initiators.

The point is that the vast majority of members of the community do not take the trouble to take part in the management due to the objective natural laws of the human mind, even if honest and decent managers would give them the opportunity. It is more comfortable for a person to be a member of the “herd” in order to free himself from the burden of responsibility, to ease the increasing pressure of the information flow on the brain. This is the action of the protective function of the brain –protection against overvoltage.

And finally, not as an argument, but as an illustration:

The formers of our understanding of the world – popular writers of all time in the works of the imaginary world (fairy tales, science fiction, fantasy) all the time draw options for an ideal society. And it is ruled by good kings, wise wizards, councils of competent scientists, some other collegial or not competent authorities, but nowhere is described the option in which the whole nation exercises power. Apparently the brain of the artist may not live to present this Chimera.