FRANCE NEOCOLONIALISM IN THE TWENTY-FIRST CENTURY 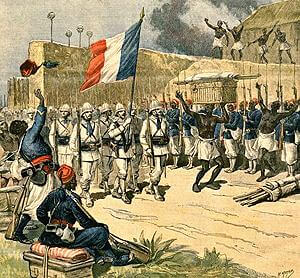 Unfortunately, the world in the twenty-first century has not got rid of colonial subordination and dependence. The victim of French imperialism today is Africa. However, unlike other countries that act as a fodder base for transnational corporations, relations with the black continent are not covered by a Fig leaf of UN declarations. The French government openly restricts the sovereignty of African States, exerting a direct influence on their internal Affairs. And it does this quite legally through the mechanisms established by international agreements.

“Thank God the situation is that most of the money in our wallet comes from Africa, which we have been exploiting for centuries.” Jacques Chirac, former President of France.

The key instrument of this is the franc Zone, a currency Union led by France that was created primarily on the basis of its former colonial possessions. One of the currencies included in this area is Afropunk or CFA. This abbreviation consists of the initial letters of the words “French African colonies”.

The CFA franc was established by decree of the French government in December 1945 as part of the reforms approved by the Bretton woods monetary conference. The weakened post-war France needed to preserve its influence over Africa and use it as a resource for the recovery of the national economy.

The CFA franc became the only official currency of two dozen countries in West and Central Africa. Since then, through afrofranc, French capital has successfully exploited a territory that is home to more than 150 million people.

Today the CFA franc is represented by two currencies at once

The second currency is the African financial community franc (AFCF) or the West African franc. It is used by Benin, Burkina Faso, ivory coast, Mali, Niger, Senegal, Togo, And since 1997, the former Portuguese colony of Guinea-Bissau. Its issue is carried out by the Central Bank of West African States.

Both currencies differ from each other only in appearance, but are not mutually convertible. Together, the countries where the CFA franc is drawn form the group of African countries in the franc zone.

Feature of afrafrancah is that its exchange rate is fixed and is controlled from the outside. Initially, the ratio was established: 1.7 French francs were equal to 1 CFA franc, since 1948-already 2 French francs for 1 CFA franc.

As the recovery of the French economy, its national currency strengthened

Since 1994, 1 French franc has been equal to 100 CFA francs. And after the formation of the single European currency, 655 Afro-francs were given for 1 Euro.

Thus, the CFA franc was artificially inflated from the very beginning and remains so today. This circumstance does not allow local economies to develop. According to their industry structure, they are predominantly agricultural. An expensive national currency makes it unprofitable to export raw materials, which are produced by a large part of the local population.

Members of the currency Union cannot devalue the CFA franc or lower the interest rate. And they probably wouldn’t, since representatives of the local comprador bourgeoisie get a lot of benefits from this arrangement. Due to overvalued exchange rate of afrafrancah, they have the opportunity to buy imported goods, providing a luxurious life in the midst of General poverty.

The result of this policy is a steadily negative trade balance of countries from the CFA zone. In record 2015, their total imports exceeded exports by $ 13 billion.

In order for the local elite to enjoy regular shopping in Milan, the CFA franc should be easily converted into Euros at an artificially inflated rate.

FRANCE NEOCOLONIALISM IN THE TWENTY-FIRST CENTURY

This property of afrafrancah guarantee of the French Treasury. And in return, he asks for nothing more than to Deposit part of the international reserves of the CFA zone countries in their accounts. Only some 50%, and another 20% to provide under the security of external obligations. Moreover, these funds are placed at interest rates, which often in France took negative values in real terms.

In other words, African countries actually paid for the use of their money by the French state

With the total amount of gold and foreign exchange savings of African countries in more than 14 billion dollars, France gets at its disposal almost 10 billion. It has the ability to dispose of them at its discretion, invest and lend at interest. Including the Africans themselves. Yes, if the countries of the monetary Union ask France for a loan, respectable gentlemen from the Ministry of Finance will give them a loan at fixed commercial rates.

However, France gives loans to CFA countries only on the condition that they will be spent on the purchase of French-made goods, and African governments will give priority to the work of French companies. France’s multinational corporations, such as total and Orano, have exclusive rights to exploit the natural resources of their former colonies, which are rich in oil, gas, uranium, diamonds, gold and iron.

Due to the fact that afrofranc was linked to the French Franc, France was able to import goods from Africa for its own currency, i.e. almost for nothing. At the same time, restricting access to the region to other large buyers. With the transition to the Euro, EU leaders who can influence the monetary policy of the European Central Bank received these privileges in addition to France.

It is interesting that the funds received on credit from African debtors are not delayed for a long time. Thanks to the pressure of representatives of France, who are present in the leadership of both Central banks of the afrofranc zone and are also given the right of veto, the local monetary authorities ensure absolute liberalization of financial regulation. This leads to a large-scale outflow of African capital to France.

Membership in the franc zone has a devastating effect on African economies, which are in prolonged stagnation

The French authorities claim that thanks to their intervention, countries get a stable currency and prices.

However, neoliberal recipes do not work either in Russia or in Africa. The price for low inflation was a complete lack of economic growth. Real GDP per capita in the CFA region has been falling since the mid-70s. 7 countries of the monetary Union remain the poorest in the world, and 2/3 of their population are forced to live on less than$ 2 a day.

This is not surprising. Without a drop of sovereignty, the CFA countries sacrifice the common people to French imperialism. States do not have the ability to manage the exchange rate and interest rates and support commodity exports with their help.

The only available tool for them to compete with their neighbors is the so-called internal devaluation. This is reflected in the ongoing policy of austerity, which includes high taxes on household income, minimal budget spending on education, health and agricultural support, as well as large-scale job cuts in the public sector. These actions, based on the recommendations of the IMF, are aimed at maximizing the cost of labor and reducing aggregate demand in order to maintain the balance of payments.

You may ask why African States agreed to participate in the French currency Union. The fact is that this institution was established 15 years before the wave of national liberation movement rose in Africa with the help of the Soviet Union. The free republics were determined to create their own currencies. However, France has set a condition that it will recognize their independence only if they retain membership in the franc zone.

At the same time, the French authorities imposed on Africans the conclusion of so-called cooperation agreements, which regulated a wide range of issues, including mining, foreign trade and international relations, the structure of the armed forces, the higher education system, the work of civil aviation, and much more. These agreements cemented France’s economic and political dominance over the former colonies, turning their independence into a fiction. Many African countries tried to escape from the yoke of the mother country.

And some of them succeeded. In different years, the Franca zone was left with great difficulty by Guinea, Djibouti, the Comoros, Mauritania, and Madagascar. In other countries, the struggle for independence was not successful. Togo’s President, Silvanus Olympio, was assassinated in a French-backed military coup after announcing the rejection of the CFA franc in 1960.

An unenviable fate befell other prominent African politicians, including the legendary Tom Sankara, who tried to resist the French financial dictate. All of them were either killed and or deposed as a result of Pro-French coups. In total, since 1960, the French armed forces have participated in military operations on the continent more than forty times. But time does not stand still.

With the help of Nigeria, the Economic community of West African States – ECOWAS-was founded in 1975 and is headquartered in the capital of Nigeria. It included several countries from the CFA zone. The integration group is constantly developing and even forming its own collective armed forces. In 2000, ECOWAS announced the creation of its currency Union, the West African currency area, and the ECO single currency, which was initially scheduled to launch in 2009, but then postponed to 2020.

Sensing an impending threat, the French authorities attempted to seize the initiative. In December 2019, French President Emmanuel macron, during a visit to Africa, called colonialism a mistake and called for “opening a new page in the common history”.

Backed by the fully loyal governments of ivory coast and Senegal, he announced the transformation of the CFA franc system. Now, members of the franc zone will no longer have to keep most of their reserves in the French Treasury. In addition, the French representation in the management of banks in West and Central Africa is canceled. The old name of the CFA franc is changed to the new one – Eco. Yes, macron just took and stole this name from Nigeria to seize the initiative and force it to accept the terms of France.

Despite external easing, Macron’s innovations did not please the African public. After all, in fact, the system has remained the same, its main element has been preserved – the rigid exchange rate of Eco to the Euro. This means that the policy of manipulating African economies in the interests of French corporations will not go away.

Dictatorial regimes controlled by French capital will diligently suppress any attempts to resist the system of neocolonial oppression. Therefore, the struggle of the proletariat for its rights and international solidarity with the workers of Africa is of particular importance.