HOW THE NSA MONITORS THE GLOBAL FINANCIAL SYSTEM

… In the summer of 2010, one middle Eastern businessman wanted to transfer $ 50 thousand from one country of the region to another. He had a condition that the transfer was made without the participation of us banks, and the recipient Bank was unknown to the sending Bank. The translation according to its conditions was made. However, he did not go unnoticed. Along with a large number of other documents characterizing the NSA’s financial intelligence, he was at the disposal of Spiegel magazine. The documents show how fully and effectively the NSA monitors global financial flows and stores detailed information about them in a powerful database specially designed for this purpose.

The unit at the NSA that deals with this issue is called the money Tracker. This name is reminiscent of the famous FBI Executive Director Mark Felte, who was hiding under the pseudonym “deep throat” and acted as an informant Bob Woodward and Carl Bernstein, who conducted the famous investigation of the Watergate scandal that led to the resignation of Nixon.

One of the favorite sayings of scouts: “Money is the root of all evil.” According to secret documents, the NSA’s activities in the field of financial transfers are focused primarily on Africa, the middle East and Latin America. Most of their efforts are within the legal framework. However, as in other areas, the NSA’s financial sector is driven by the need to collect as much data as possible. This approach appears to lead in some cases to conflicts with international agreements and national legislation.

Secret documents show that as of 2011, the financial database of the NSA Tracfin contains data on Bank transfers, transactions with 84% of credit cards and other financial transactions carried out by 180 million objects, i.e. individuals and legal entities. In 2008, these facilities were 20 million Tracfin Data is stored for 5 years.

Secret documents show that the NSA in several ways provides access to internal swift traffic, which covers more than 8,000 major banks around the world in several ways. Methods include interception of traffic by connecting to SWIFT fiber optic lines, as well as direct interception of traffic based on available access to the transmission protocols and cryptographic encryption keys, and finally, direct access to the NSA SWIFT network.

In addition, the Agency has in-depth knowledge of credit card processing, primarily Visa and MasterCard. It also follows from the documents that the NSA is very carefully engaged in various kinds of anonymous means of payment and, above all, Bitcoin.

The information obtained on the basis of financial transactions gives an almost complete picture of the activities of individuals and legal entities, their partners, customers, contractors. It allows you to track their activities in almost real time, to be aware of movements, to receive full information about their problems, conflicts, difficulties.

The most politically explosive is information about the NSA’s secret access to the SWIFT system. The NSA has lobbied for years to get direct authorized access to the SWIFT system. For a long time it could not be done. However, in 2010, with the help of the German government such consent was obtained. At the same time, it should be borne in mind that the actual access to the SWIFT system using technical and software spyware has been implemented since 2006. A little later, the NSA with the help of software and hardware was able to obtain all the necessary data on transactions transmitted through the system of international Bank payments SWIFT directly from banks.

EU Commissioner for home Affairs Cecilia malmström said that ” Americans need to tell us exactly what they are doing in reality. We need to know exactly what their activities fit into the agreement and what does not. If they do not give up the goals that are not spelled out in the contract, we will have to consider the termination of the agreement.”
From the documents it follows that the NSA financial espionage is with the active participation of the U.S. Treasury and the IRS.

The NSA has a special program, Dishfire, which allows you to collect information about credit card transactions from the 70 largest banks-issuers and holders of major correspondent accounts on credit cards. At an internal conference in 2010, NSA analysts presented an extensive detailed description of the tools that allowed the Agency to gain permanent access to the complex networks used by major card companies to process transactions and payments.

One slide provided by Spiegel shows in detail the means to track the authorization process for each transaction, starting with a credit card reader in the store, a Bank transaction, data processing, and finally a credit card charge. 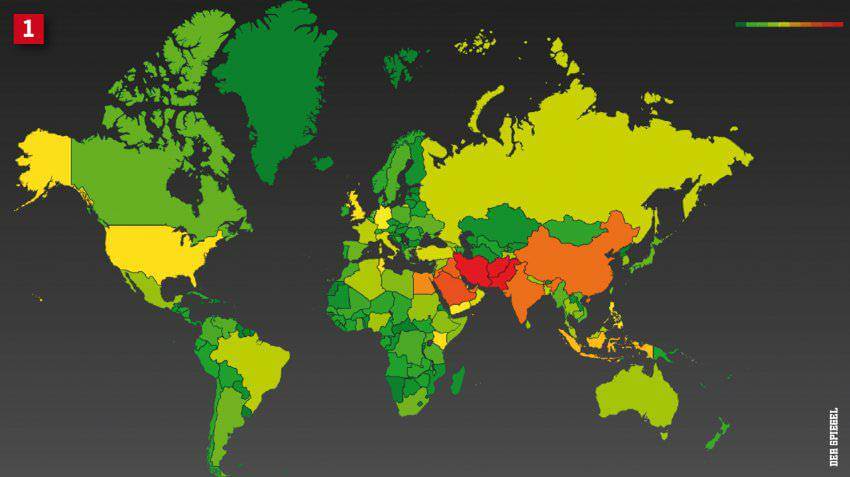 According to the documents, the NSA also has access to the Western Union system, which carries out money transfers in more than 200 countries.

Recently, the company began to protect its transactions with encryption system. It is clear from the documents that this creates certain difficulties. Moreover, some believe that this encryption makes access almost impossible. However, given the NSA’s cryptographic capabilities, Western Union’s protection could also potentially be compromised.