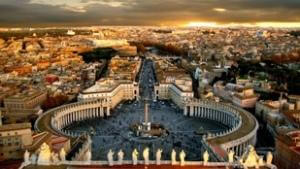 At the turn of the 1950s and 1960s, Catholicism, adjusting to the demands of the era in order to preserve its influence, allowed for a renewed turn at the second Vatican Council, which marked the beginning of Ecumenical openness of the Church, which had serious consequences, expressed in the spread of religious pluralism and tolerance, in the active process of pacification, which accelerated the de-Christianization of Western society.

TREASON IN THE VATICAN

The “new evangelization” of John Paul II, accompanied by the expansion of the external openness of Catholicism and carried out in parallel with the restoration of the international political weight of the Vatican, not only did not stop the erosion of the religious consciousness of Europeans, but led to the erosion of traditional values of Europeans, which acquired a threatening character. All attempts to restore Christian notions of morality and to resist the degradation of the Western man are unsuccessful.

1. The Catholic Church during the neoliberal 70’s-80’s of the twentieth century
2. Geopolitics of John Paul II
3. Ecumenical openness and its results
4. Benedict XVI: the history of world political power

Under Benedict XVI, the Catholic Church, seeking to regain spiritual leadership and remain at the forefront of world development, began to openly take over the ideological leadership of the process of integration of the world into the new global order, forming its moral code and giving religious meaning to the system of control over humanity, which is created by supranational ruling elites.