THE SILENT TRIUMPH OF RUSSIA’S EDUCATION 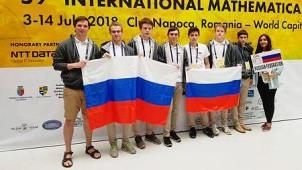 I got excited about the idea to look at the results of the 2018 international Olympiads beetween schoolchildrens in the following subjects. Small stories on television in mid-2018 suggested that the results were generally positive. The reported success, the medals, the happy faces of returning members. But there were some doubts.

The fact is that gold, silver and bronze medals at international subject Olympiads of schoolchildren are awarded not as at sports Olympiads. Medal here receive not only the three best (among all) of the participant, and all participants who score over a certain number of points. Accordingly, those who do not meet the standard at least for the bronze medal – remain without awards. That is why there was doubt: what if all our teams really brought personal medals, but most of the participants of the teams were left without them. And state television, well, it can be, just stuck out in short reports is the medalists. And suddenly at the Olympiad, the threshold for receiving the medal were low and their all “distributed”… And so on. I began to scour the official English-language websites of the Olympics and that’s what I found out.

Teams have the right to stand for 6 members. The result of Russia – 5 gold medals, 1 silver. The result is brilliant! The assumption “the distribution of” medals “so no one was offended” – not confirmed. 31 the team did not get any medal, even bronze. But many top teams had in their ranks bezmetallny participants. Five gold medalists in General had only the US and Russia. Team Russia: Crimean, Gerasimenko, Abdrakhmanov, Luchinin, Petrov, Ryabov.

Teams have the right to field 4 participants. The result of Russia – 2 gold medals, 2 silver. Not even a single bronze! The number of “bezmetallny” participants from other teams more than a hundred! Our guys: Burdonov, Kobelev, Konoplev, Matveev.

Teams have the right field on 5 participants. Russia’s result – 4 gold medals, 1 silver. No comment. No, that’s review: physics – Russian theme. Was, is and will be. Well done guys: Bobkov, Kuznetsov, Chapaev, Shishkin, Yakovlev.

Teams have the right to field 4 participants. The result of Russia – 2 gold medals, 2 silver. Who else has questions where “Russian hackers” come from? Our medalists: Rakhmatullin, Novels, Lifar, Anoprenko. And in other teams 160-odd people didn’t reach bronze.

Olympiad in astronomy and astrophysics

Our people have always been drawn to the sky and the stars. Teams have the right field on 5 participants. Russia is the exception (cause not found), the only allowed to put 2 teams – main and “guest”. The result of the main Russian team – 4 gold, 1 silver. Space – our, our – space. What is there to say? Debt, Arkhipov, Chapaev, Starostin, Gasimov.

As a graduate of geographica particularly interesting. Teams have the right to field 4 participants. Russia’s result is gold, silver and two bronzes. It is 6th in points and 7th in medals. So, attention, this result (world TOP 7) is the WORST result among the Russian results for the Olympics in 2018! Our guys: Bogdanova, Bogolyubsky, Kospanov, Selyugin.

Results overall, in all of these subjects are average. Average between “excellent”and” fantastic.” All participants in all subjects – medalists! How is that?! And among the medals, the prevailing is gold. And these guys even started to study not long in the Soviet school. I. e. they in the first class the went in late 2000’s! This is chemically pure “Putin’s generation”, “victims of the exam”, “qualified consumers”. And all this without the middle East and “Russian Germans” who left us. What’s wrong?