NORD STREAM – 2: A ROYAL GIFT TO UKRAINE FOR GERMANY 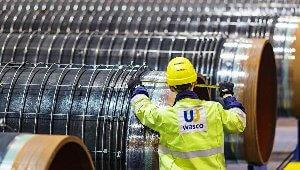 Gas pipelines bypassing Ukraine – “Nord stream-2” and “Turkish stream” – again in the spotlight. From the United States and then there are threats to impose sanctions against the project and the companies involved in the construction of Nord Stream 2, Romania is trying to block its implementation of amendments to The gas doctrine, the Energy community “digs” under the “Turkish stream”. Well-known Ukrainian energy market expert Valentin Zemlyansky expressed his opinion why Germany is interested in the implementation of Nord Stream 2, what are the interests of the United States and what is fraught for Ukraine to follow in the Wake of US foreign policy.

– Recently, the Forsa Institute conducted a survey, which showed that the majority of German citizens have a positive attitude to the construction of the Nord stream — 2 gas pipeline. In General, 73% of respondents have a positive attitude to the project, while only 16% believe that Germany could do without it. Why Germany is so keen on the “Nord stream — 2”?

– “Nord stream-2” is, in fact, the Royal gift of Germany from Ukraine. In this case, Russia and Germany in the current political situation simply implemented this economic project. And they implemented the mobilization of this project for the simple reason that Ukraine discredited itself as a transit country. And discredited both in terms of reliability and in terms of contractual capacity. The proceedings in Stockholm and the absolute politicization of the process of negotiations on the further use of the Ukrainian gas transportation system have been booming all over the world in the last five years. All these things have updated the implementation of Nord stream 2 and enabled Germany to become a key player in the European gas market, as most of the Russian gas will be distributed through the German market — through German exchanges, through German oil and gas companies.

That’s what we are talking about and that, in fact, so concerned about the States – the economic strengthening of Germany

Moreover, the support of the Germans for this project is very clear, since Germany receives economic preferences against the background of the implementation of such a project and Russia’s political support in the European Union. First, preferences in the form of gas prices, which are clearly lower (and this is clear from the statements of German officials) than the price on the European market as a whole. And the second point is the issue of additional economic dividends that Germany receives in the form of participation in the project itself. Not only Germany, but also those countries that take part in it. By and large, these are jobs: loading of metallurgical steel enterprises, orders and contracts with service companies. Don’t forget, any modern pipeline is and telemetry, and it is connected and IT-sector. It should be understood that this is a technologically complex project, and not only large oil and gas companies are interested in its implementation, but also a number of companies that are involved in the process of its creation, in the process of its operation.

– The results of the same survey showed that 90% of German respondents believe that trump’s threats to the Nord stream-2 are based solely on economic interests — the desire to sell American liquefied gas to Germany. How realistic are these plans of the United States?

— There is nothing unreal, the whole question is the price and volume. There are very strict economic laws, and no one will go to any preferences in favor of political agreements. Therefore, the American liquefied gas will be purchased, but in small volumes. If the States cannot offer a sufficiently competitive price, then it will be a political curtsey. As it was when Angela Merkel agreed to build another, useless, LNG terminal in Germany. But again, it will be a gesture, not a real economic or business project. The volume of purchases of liquefied gas from the United States will be minimized, and this should be regarded only from the point of view of the polites in relations between the countries.

– The US has one last chance to block the gas pipeline: the introduction of sanctions against companies that physically lay pipes or participate in the financing of construction. German foreign Minister Haiko Maas said that the exit of Western companies, including German concerns, will not lead to the curtailment of the project. In this case, Russia is implementing it alone. Will Russia be able to finish the construction of the gas pipeline on its own?

– Now Gazprom is in the process of searching for loans, we are talking about six billion euros. But we must understand that there is no problem for Russia to enter the foreign borrowing market. And the profitability of the Nord stream-2 will allow you to return the borrowed funds quickly enough. In March, “Gazprom” has placed in London bonds for 750 million euros at 2.5%, and test a sovereign loan of one billion euros was under 3%. In principle, I think it will not be difficult to find 6 billion euros in foreign markets to complete this project.

As for laying pipes on the bottom, who does not want to earn? I think that, firstly, there will be willing, and secondly, there will be legal loopholes that will allow the implementation of such a project under another jurisdiction or in some other way. Because formally the building permit is granted, and no one will withdraw it — all the formal procedures are completed.

The biggest problem of the “Nord stream-2” is still not at sea, but on land. This is a question of completion of the EUGAL gas pipeline on the territory of Germany, that is, by what time it will be completed. And this is the normative regulation of the functioning of both the “Nord stream -2 “and the branches — ORAL from the” Nord stream — 1 “and EUGAL from the”Nord stream — 2”. It is here that problems may arise: arbitration, courts, blocking by the European Commission, in fact, legislative bureaucratic obstacles for the use of gas pipelines by 100%, that is, for pumping 110 billion cubic meters of gas per year through Germany. For example, Romania, as the President of the EU Council, recently submitted a new version of amendments to the EU Gas Directive, which may affect the projects implemented by Gazprom for the construction of the Nord stream — 2 offshore gas pipeline and the continuation of the Turkish stream to European countries.

– That is, the construction of Nord stream 2 will necessarily be completed?

— Yeah. But the main problem for Ukraine is not in the completion or unfinished construction of the Nord stream — 2, but inside the country. This is a question of transformation of Naftogaz of Ukraine and its transition to work according to European rules, norms and, accordingly, the creation of conditions for the preservation of transit in the largest possible volume. We are talking, first of all, about the normative part. Ukraine must meet all the conditions for the division of Naftogaz, for the creation of an independent operator, which must be certified by the European Commission. In other words, a structure that will be able to assume all obligations for the transit of Russian gas from January 1, 2020 should be absolutely ready for operation.

Further-contractual work (that in Ukraine is completely failed). Contractual work with Gazprom and European companies. And with European companies-in two directions. The first is the possibility of attracting investments or management partners, to which the Europeans, in principle, are ready. But they want to understand very clearly the economic reasons for inclusion in such projects: if there is a policy of minimizing the volume of transit, it will be wasted money. And the second is the contractual work on changing the point of gas transmission, respectively, the use of the Ukrainian route, and not the Northern direction. But it also requires interest. Europe should understand the economic reasons for the work on the Ukrainian route.

— Satellites of the USA: Baltic States, Poland, Ukraine, partially Moldova are against. And their statements are purely political. Poland, which contracts American gas and says that it will be 30% cheaper than Russian. A very controversial statement from the point of view of economic expediency of such decision. If this is an anti-Russian position, then we are again talking about politics, the economy is simply not there. Because any country, normal, European, seeks to diversify sources, that is, the more sources of income you have, the more you have room for maneuver on the price.

– Germany warned that in case of sanctions against Nord stream 2, no one will guarantee transit through the Ukrainian GTS. What does it mean for Ukraine?

– The Germans say that they are ready to guarantee transit. That is, they give an indirect hint that they are ready to contract for the supply of gas along the Ukrainian route and lobby for this issue. Ukraine considers itself the navel of the earth, the center of gas transit, but this is not so. Therefore, obtaining the support of the same Germany is important for Ukraine. For Germany, this is also interesting from the point of view of the system of a certain counterweight, so as not to become completely dependent on the implementation of the Nord stream — 2.

But again, if Ukraine tries to remain politically under the influence of the United States and at the same time receive lobbying efforts from Germany, then it will not be possible to sit on two chairs. Here it is necessary to be defined very accurately where there is Ukraine in this system of political coordinates. If it continues to go in the Wake of US foreign policy, then I am afraid that we should not count on Germany’s support — it will be purely formal.

If Ukraine wants to receive certain economic dividends and support from the major players of the European Union, primarily Germany and France (and possibly Italy, which in principle will not object to have a reserve source of Russian gas not only on the “Turkish stream”, but also on the Ukrainian route), then it just needs to determine its foreign policy priorities. Otherwise, you can just stay at the broken trough, as in the famous fairy tale.

– Ukraine has begun test operation on natural gas exports. Why this is done?

– Option two. First, when ” Naftogaz will be divided, and will operate an independent operator, of course, will be able to so-called “virtual reverse”, that is, replacement schemes. These are purely technical issues.
And the second option. That policy, which is actively implemented and will probably continue further in case of Poroshenko’s repeated victory in the elections. This is an opportunity to export Ukrainian gas after gas prices inside the country will be brought to the level of European (that is, the conditions for non-discrimination will be met, which is spelled out in the Association Agreement with the EU), and 30% of the shares of “ukrgasvydobuvannya” will be put up for sale.

— No. But can simply further reduce its consumption. Today, Ukraine already covers two-thirds of its gas needs-have survived! – not because of energy efficiency, but because of reduced consumption. The population with” communal ” consumes about 16 billion cubic meters of gas per year, the industry consumes 10 billion cubic meters. The tendency to reduce the number of cities using Central heating is quite high. The transition to the private small boiler corny firewood, straw and dung is also quite high. Further reduction of the industry — no growth drivers are expected. So we can get to zero fast enough. In Ukraine, the construction industry and metallurgy are still quite large consumers of gas in the industry, the chemistry has already “blown away”.

I do not rule out that our own gas will be exported and imported at the same time. This is a free market, and, relatively speaking, private companies that produce five billion cubic meters of gas in Ukraine want to be able to export it freely.